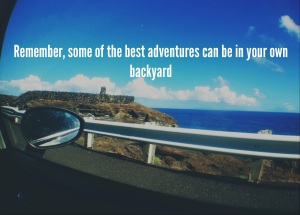 When my good friend, Eeva, asked me to do a guest blog write-up about why travel is important I figured it would be easy. I would just describe some of the beautiful destinations I have been to…it was easy. So, over the week I started thinking about what I would write about. What have I seen that made an impact on me? What transformed me for the better and for that instance? What I kept going back to was the many local road trips I have had the opportunity to take. And, all of them have come with a story.

One which stands out is when I still resided in Grande Prairie, Alberta. I needed to leave. I had to get out. It was the time where you could smell the winter in the air. It was the type of cool air that brought tears to yours and eyes and froze your nostril hair. Seriously!

So that night I decided to get in my tiny white Volkswagen and just go.  There was no planning in this. I quickly turned the key and crept out of the driveway and left my then temporary home. The night was beautiful and exhilarating. The windows down and the cold wind that it brought in brushed against my skin and blew my hair against my face. The hair whipped against my skin but the harm was acceptable. It was needed and wanted.  The town was so quiet and dark.

One thing I realized very quickly was that I should have at least planned one thing. That of making sure there was gas in the car. I should have known that. I’ve done this plenty of times. I should kick myself for this. My glances towards the gas gauge became more frequent and more panicked. What if I didn’t make it to Grand Cache? Would I be confident enough to get out of the car and walk if needed?  I have watched way too many horror movies and my imagination was starting to go crazy. I kept going and put my confidence in Lucy.

‘Come on girl…you’ve never let me down before’ (kinda)

I’m also not crazy. You see I named my car Lucy and at this time in my life she better come through. I had confidence in her. And, all of a sudden what I dreaded happened. The tiny light that lets you know you’re close to empty went on. Close meaning it’s going to happen now. NOO! No, no, no! My girl was letting me down and I had no idea how much longer it would be to get to my closest destination. My posture became more rigid and I leaned much closer to the wheel. This had no affect other than to make me more stressed.  Inside I was going crazy and tried to be a little rational about what was going on. And….and then! Grand Cache appeared and I saw the most beautiful thing I’ve ever seen in that moment and that was a gas station. This has to be the best invention, seriously.

I cannot wait to put some gas in this car (Lucy, I will have a talk with you later)

I ended up staying the night at Best Western since everything had been closed…including all of the gas stations. In the morning I filled up and continued on my journey. I stopped at a few other spots which were just as memorable and just as crazy.

Remember, some of the best adventures can be in your own backyard.

Dempy Kaur
http://dempykaurphotography.com/
“The basis of art is truth, both in matter and in mode.”