It has been awhile since my last post, however, no amount of time can erase from my mind the memories of wining and dining in Paris. Even now my mouth is watering, salivating. Oh the food! The wine! The dessert! And of course the coffee (so I was told, as I don’t drink the stuff). 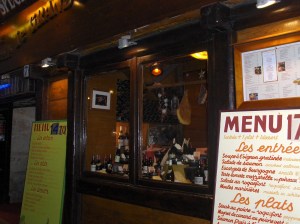 Finding restaurants to have dinner at was akin to being at a shoe store…so many to choose from! Many areas had blocks of restaurants: St Michel, the Latin Quarter, Marais. Our usual selection process had us perusing the streets to find a restaurants of our liking. The selections seemed endless! And not only “french food”. Choices included chinese, greek, indian, latin, japanese, etc. Though, we certainly stayed away from the sushi restaurants. When you live on the west coast of BC, inexpensive yet good sushi is a staple. That was one restaurant choice we passed up willingly.

The majority of restaurants offered a “prix fixe” menu. This is where the restaurant offers a set selection of menu items for one cost. It is quite common and a great value. Although there are some variations, the most popular menu consisted of “entrees” (appetizers/salad/or soup), “plat” (main course) and “dessert”. You can see that the value in these menus. Generally you had a choice of about 3 items per category.  Some places also offered a la carte but the prix fixe was such a great deal that I rarely passed it up. And the meals were of appropriate portion size. Just enough for one person, unlike in North America where often one dish can feed a small country. Of course, I can not forget the wine. Beer and soft drinks were served as well but I stuck with wine. Wines could be ordered by the glass, jugs or bottle, which were measured in centilitres (cl). Being used to millilitres, a bit of math was required (and for anyone who knows me, math is not my forte). The wine was inexpensive yet appetizing. Disappointingly, once home, I learned that you could actually bring your own wine bottle to a restaurant only to be charged a small corkage fee. Regardless, the restaurant’s wine choices were excellent and affordable.
Although we branched out a couple times to sample chinese and greek food, the majority of places we dined at served french food. This brings me to trying to decided which meal was my favourite. The French Onion Soup I had at Chez Leon was amazing (25 Rue de Lyon, 75012 Paris). As was, surprisingly, the french fries with “steak frites” at Maison Blanche (21 rue de la Hucheete, 75005 Paris). The french may not have come up with the french fry but they certainly perfected it. Light, crispy and golden. I must admit though, that my favourite dish was one that I didn’t even order. Dining on our first night we went to the Latin Quarter’s La Julia Restaurant Franco-Latino (31 – 33 rue Descartes, 75005 Paris) where both my sister and Trina ordered the duck confit while I ordered enchiladas. Allowing me a taste of this savoury, rich, fall-off-the-bone tender duck was heaven. I realized I had ordered the wrong meal. I had duck a couple times after but it did not compare to that scrumptous forkful of sheer delectable perfection. I’m keeping the business card for future reference.

Having dessert included in our meals was a great way to end a lovely meal.  The best part of dessert was that cheese was often an option….mmmmm….cheese. Classic french desserts were the typical fare. Creme brule, apple tartine, frommage blanc, flan and of course a selectioin of 2 or 3 cheeses. Ending off the evening was time for coffee (or tea in my case).

I do believe the french are onto something with their style of eating. Small portions but well made with fresh ingredients, taking your time to eat and savour every taste. And why would you not? After all when you sit down to dine at a restaurant in Paris, the table is yours for the evening. No rushing involved. It’s acutally frowned upon to dine and rush out. Gotta love that style of eating!