Ah, Hawaii – a beautiful American archipelago in the South Pacific. Blue splashing waters, lush green mountains, intoxicating fragrant flora, and a money-sucking, wallet draining headache. WHAT??!?! Uh Eeva – you describe paradise and then ruin it by introducing the reality of the cost of paradise?! What up with that?


Well it’s true – Hawaii can be an expensive place to visit. The hotels don’t all offer all inclusive options. There are tour groups around that will charge you for all sorts of things (some worth it, some not). And since much of the food has to be shipped, often refrigerated, via container ships the food is not always cheap and ice cream NEVER is. Then there is the designer shops all along the main street by Waikiki Beach (Coach, Ed Hardy, Guess, Prada, etc). Yep, you can spend a crap load of money in Hawaii…or not.


This is what I did to save money on activities. Granted I didn’t do a lot – I did spend time just lazing around, which suited me fine. Though, the few things I did I did not spend too much money.


1. USE THE BUS! Oahu has a good transit system. It may take a bit longer at times to get from one place to the other but you’re holidays so what’s the rush?! Besides, you’ll probably enjoy the air conditioned ride. The cost is $2.50 (exact change) per ride and you’re given a transfer that is good for 2 hours. That being said, I did notice that many of my transfers were actually good for up to 4 hours. That saved me some bus fare. You can also purchase at 4 day unlimited visitor pass for $25. Any ABC store sells them. And the bus driver’s know where everything is – a great resource.

2. FREE ENTRANCES – USS ARIZONA MEMORIAL at PEARL HARBOUR. By law the entrance to the Arizona Memorial is free. There is 75 minute guided tour (a film & boat trip to the Memorial). Tours are first come first serve from 8am – 3pm and be prepared to wait. Tickets are handed out at the information desk. I waited 45 min which was a good amount of time. I went to the snack shop and bought an egg salad sandwich which I ate while looking out at Pearl Harbor. I then looked around at the commemorative plaques that listed the names of all the soldiers and civilians lost during the bombing. After, I proceeded to one of the free interpretive exhibits to learn more about the Pacific aspect of WWII.  It was then time to proceed to the theatre for tour. The tour was very somber and just confirmed in my mind that nobody wins when there is war.

If you want to see the other memorials there is a fee involved. As well, you are not allowed to bring bags or purses to the park – either leave them in your car or at the baggage storage area for $3. Cameras and water bottles are permitted.

ALI’ IOLANI HALE BUILDING & KING KAMEHAMEHA V JUDICIARY HISTORY CENTER: This is a beautiful building that was redesigned from a palace to the legislature and Supreme Court by King Kamehameha V after he had the ‘Iolani Palace built (across the street). It is a beautiful building that I fell in love with. Entrance is free and it also houses The Judiciary History Center (which is also free and you can arrange for a tour or see it on your own, as I did). I did learn about original Hawaii law and the changes that came about as settlers came to the island and eventually becoming a part of the USA. The  building is open from 9am – 4pm.  I came across this building as I stopped to take picture of the statue of King Kamehameha that sits in front of it.

WATCH A HULA SHOW:  As I walked along the “main strip” in Waikiki at night I came across a  Hula Show. There were men singing while playing the ukulele accompanied by women hula dancing. This was set on the grassy area in front of Waikiki Beach. The lights of the hotels and shops illuminated them and the crowd was mesmerized.

ENJOY THE BEACH (from morning ’til night): This one is a no-brainer. Waikiki Beach is looonnnggg. So regardless of where you hotel is, if you’re staying in Waikiki there is beach for you to enjoy. A morning stroll while listening to the waves crash; making a sandcastle; soaking up the sun or taking in some bright, beautiful sunsets, the beach has much to offer. All the beaches in Oahu are public so you can go wherever you want. If you have your surfboard then you’re set for catching some waves (though in the winter months the waves are better on the north shore of Oahu). The beaches also have areas where you can rent surfboards, go on outrigger boats and other water activities. I don’t know what the fees are as I didn’t do any of that so you will want to factor that into your budget if that’s on your list of fun stuff to do.

3. CHEAP STUFF – HIKE UP DIAMOND HEAD: Diamond Head State Monument is a hike that will leave you breathless, mainly for the stunning views. The cost is $1 per person (walking in) or $5 per car. The park is open 6am – 6pm with the last allowed trek up to the top at 4:30pm. As it can get very hot during this trek bring a bottle of water and a hat. Be generous with your sunscreen as well. The trail itself is mostly switchbacks that are worn and uneven in some places but not difficult if you’re of reasonable health. I did not find it difficult at all. There are some stairs and they were a bit tiring but not to difficult. I just rested when I was tired. Allow yourself 1.5 – 2 hours for the whole hike (to the top, viewing time and coming back). Be advised that if you are taking transit (as I did) you will walk up a hill and through a tunnel to get to the park entrance and then start the hike. The park does have washrooms and some areas to buy some snack foods (shave ice in my case).

VISIT LOCAL FRUIT STANDS:  Through Couch Surfing I met a fellow “surfer” who invited me along a round island tour with her and some new friends. It was a quick stop at many places, however, one of the best was at a fruit stand that served some of the freshest and yummiest fruit I’ve ever had – papaya, pineapple, coconut and apple bananas – and for a reasonable price. 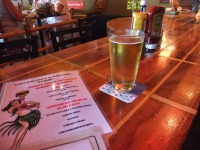 HAPPY HOUR AT RESTAURANTS: It would seem that Waikiki is a perfect place for Happy Hour at many a restaurant and bar. And why not – you’re on vacation. Quite a few restaurants and bars/pubs offered a Happy Hour that included food and drinks. Of course, many were on a limited menu  and at odd times (e.g. 2pm – 5pm and you must sit at the bar). Nothing that didn’t work for me. Some would have them later 4pm – 6pm and then again from 10pm – 11pm. Every place was different but a great way to enjoy some food and maybe a beer or two at a discount. Don’t forget to tip.


Now this, by any means, is NOT an extensive list. I had a fairly mellow holiday with more lounging than running about. But I still was able to save some money. Use the Internet to find out some great deals, ask the locals and even take advantage of coupon sites like Groupon.I have also heard that car rentals are reasonably priced. You can find ways to make your dollar stretch even when you’re vacationing in a more expensive destination.