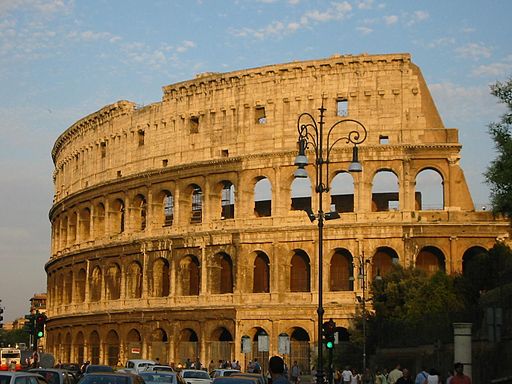 As much as I like researching obscure and lesser known whereabouts (at least to me) to feature on Sundays, now and then it is good to post about famous landmarks around the world. Afterall, they are well known for a reason. Rome’s Colosseum is no exception. A truly stunning building that I was able to see a very long time ago and hope to see once again in the foreseeable future.

Started in 72 C.E. by Roman Emperor Vespasian, it took eight years to complete the oval amphitheatre with its eighty arched entryways and an over 50,000 spectator capacity. Under the rule of Emperor Titus the world’s largest amphitheatre was completed in the year 80 C.E. It was in use for centuries as a battleground for Rome’s infamous gladiators as well as used for chariot racing, battle re-enactments, and gruesome events such as executions of both people and animals.

Despite much of the building destroyed due to earthquakes and stone robbers of years past this ancient edifice boasts throngs of tourists and visitors hoping to glimpse a piece of history and stunning age-old architectural design.  Officially built as The Flavian Amphitheatre, it truly is a sight worth seeing.

One thought on “Sunday’s Special – The Colosseum, Rome”