Another aspect of diversity that comes from living in a larger metropolitan city is the various representations of religions. Although I am not a fan of organized religions and do not subscribe to any one belief  “system”, it can not be denied that religion plays a huge role in the lives of people everywhere. In Greater Vancouver there are plenty of temples, mosques, churches etc that support it’s peoples beliefs. Even if you aren’t religious sometimes it’s great to visit these places of worship to keep your mind (and heart) open. And if not for that, just to get a taste of what is it’s like in some other country in the far reaches of our great world.

Seeing as my main mode of transport is public I have been able to see the outsides of many a temple via bus. The two that I thought were quite beautiful were the Buddhist Temples in Richmond, BC. I’ve wanted to visit them for some time now but have never wanted to go by myself. So when my Couchsurfing  friend J organized a trip out to one of the temples to celebrate the first full moon of the Year of the Rabbit I was all over it (we went on Feb 17, 2011).

The temple that we went to is a Mahayana Buddhist temple and part of the International Buddhist Society. Although I don’t know all that much about Buddhism, J say this is the same type of Buddhism practiced in China. She also told us that this temple was quite lavish compared to many of the ones she visited in Singapore. There is a lot of support for this temple from the Asian community in Richmond.

If you want to visit this temple I would recommend it. Here are the details of when & where:

Buddhist Temple
9160 Steveston Highway (between No. 3 and No. 4 Roads)
Richmond, B.C., Canada
(there is a bus that stops in front of the temple too)

Open daily from 9:30am – 5:30pm
They offered guided tours to groups of 15 or more but otherwise you’re free to walk around the temple, as our group of 5 did. They have information areas set up in the main building.

Check out my pics below!! 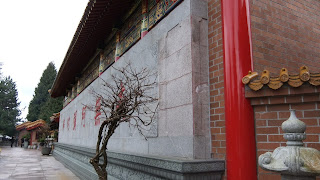 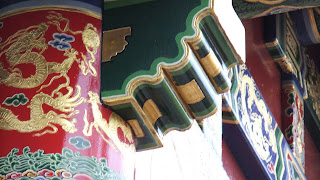 amazing detail from the buildings 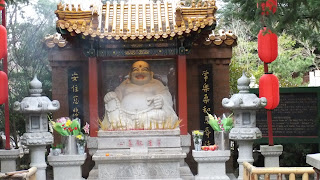 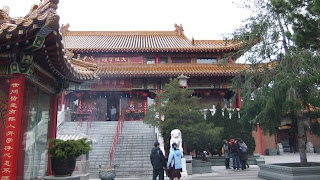 The main temple itself. No photo taking was allowed inside the temple. Here you could make offerings of fruit & vegetarian foods. They go to the monks who reside at the temple. 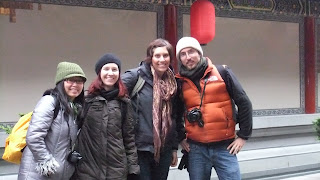 My fellow temple visitors (I’m taking the pic). A great day it was!