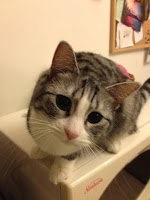 One year ago today I adopted a rescue kitten from Vancouver Orphan Kitten Rescue Association (VOKRA). Earlier that year I had put my 19 year old black Siamese-Burmese cross to sleep. He was very old and had stopped eating and drinking. He had a good life yet letting him go was one of the hardest things I have ever done. No cat could compare with Cairo – he was the best, so I was bound and determined not to get another cat for some time. I missed him terribly but still refused to adopt another.  Soon after, I realized that the life that an animal brings into ones home is amazing and knew I needed another fur baby. Despite that I tried to make it difficult for myself -after so many years I felt I was betraying the memory of beloved black fur ball. So I set out to adopt a cat but only if all the criteria was met. Below are the conditions I had set out:

Hey, I told you I was making this difficult…
I was convinced that I would be searching for weeks, if not months for this cat (famous last thoughts). This was towards the end of November. I perused VOKRA’s website and saw some cute kittens but none of them qualified under EVERY specification. I then went on vacation for a week. Upon my return I searched again (it was a Thursday), again thinking I would never find “the one”.  There were some cute and sweet little kittens on that website but I knew I would not find…click…THERE SHE WAS! The cutest, demure looking silver tabby with a white chest and a pink nose! THERE SHE WAS! My heart leapt – it was kitty love at first sight. I read her “bio” and quickly scrolled down, praying she could be adopted on her own. She was! I immediately filled out the paperwork and emailed it in. I was so thrilled to have found a cat that met all my conditions. I was filled with anticipation as I waited for my adoption application to be approved. I also begged the Universe to not have anyone else want her. She was so cute at 6 months old I could not believe she had not been adopted yet. It was a tense 24 hours but finally word came – I was approved. Next, I needed to contact her foster home and set up a meeting. Shy this little one was but I was certain she was the kitten for me. Her foster told me that she was very shy and may stay in hiding for several weeks as she did when she arrived at the foster home. I guess my fur baby felt comfortable with me as she was only in hiding for 6 hours. The following evening she jumped into my lap. The next day I woke in the morning to find her lying on my stomach. Yep, this cat and I bonded. She filled a void in my heart that was left when Cairo passed away. I was surprised at how quickly I became attached to her. She is nothing like Cairo and I would not have it any other way. It always amazes me the different personalities they have. It took a bit of getting used to having an energized kitten who lives to play after being owned by a senior cat for so long, though, they both have brought so much love into my life. Piper still climbs up the drapes (good thing they are old), races around at top speed and strews her toys all over the place and I expect this will be the case for several years to come. I look forward to it. I realized later that the second I saw her picture all my resolve to not get another cat has vanished. Funny eh?

Oh, and for those wondering where she will be while I travel, have not fear. She will be cared for by my bestie Trina. 🙂