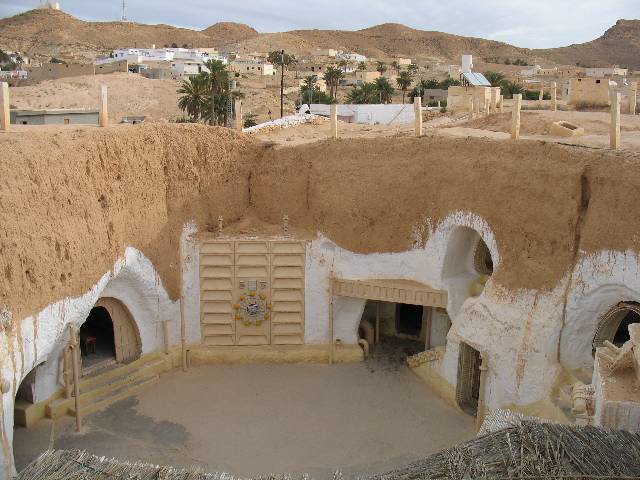 In a living room far, far away…  Okay, not that far – just a different apartment, I was watching the Long Way Down mini-series where Charley Boorman and Ewan McGregor stop in Tunisia and visit the still standing set used in several of the Star Wars movies. They visited the home planet of Luke Skywalker – Tatooine. I learned something new that night – I can go to Tatooine!! How cool is that?

Tunisia, located in north Africa, lies along the Mediterrean Sea. South of Italy and Malta, this age-old country is bathed in history. Ancient times of empires past to recent histories combined with desert sands, bustling cities and splendid beaches gives a traveler much to experience.  The Saharan backdrop certainly made it an ideal place for the fictional planet of Tatooine. Inspiration for the name even came from the Tunisian city of Tatouine.

The Star Wars movies that were filmed here were mainly in the southern areas of the country. Matmata is home to the Lars Homestead (Luke’s home). Tunisia’s fortified granaries (ksours) was the location of Anakin’s home. For some more info about the set locations, check out this article I found here.