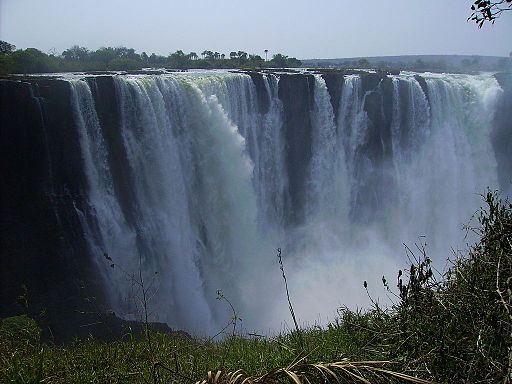 We have reached the end of the alphabet and with that we are looking at Africa’s great Zambezi River (also spelled Zambesi) where it flows through six countries, feeds the amazing Victoria Falls, and finally empties into the Indian Ocean. Africa’s fourth largest river runs east through Angola, Namibia, Botswana, Zambia, Zimbabwe, and on through Mozambique to the ocean for 2, 574 km / 1,599 miles.

This amazing river (often referred to as the River of Life) has been a vital source of life for centuries to the peoples and wildlife around it. Though in recent times it has been dammed to harness hydroelectric power in two major areas: the Kariba Dam between Zambia and Zimbabwe and Cabora Bassa Dam in Mozambique. Although these dams bring hydro power to these countries there are side-effects to the river and its wildlife as well.

The Zambezi River is divided into three sections: Upper, Middle, and Lower Zambezi and then ultimately forming the river’s delta. The incredible Victoria Falls marks the border of the Upper and Middle Zambezi and is a border for Zambia and Zimbabwe. Spanning total width of over 1,700 m / 5,600 feet and dropping 108 m / 354 feet it produces the world’s largest sheet of falling water. The mist produced floats above giving it a cloud-like appearance.