During my trip to Hong Kong I made a one day sojourn to Macau which is located about 64 km / 40 miles east of Hong Kong on the Pearl River Delta. A bridge is currently being built that will link the two cities by road. Though presently the most direct route is via ferry. There are two ferry terminals:

The second is the one I opted for. I was originally going to go via China Ferry Terminal as I was staying in TST, however, according to Google Maps there was not way to get there via foot or transit. Hmmm. I opted to take the MTR to the Hong Kong Macau Ferry Terminal which was very easy to get to.  Later I learned you can get  to the terminal in TST  via foot through Harbour City Mall. Go figure.

My ticket and window seat assignment

interior of the ferry

Once I arrived at the ferry terminal it was easy to go and buy my (economy class) ticket. The next departure was with Turbo Jet so that is who I went with. The whole process was easy and smooth. I had remembered to bring my passport so I was good to go! The high speed ferry is only for foot passengers (they assign seats) and it motored on at quite a clip. At times it was a bit rocky but I managed. 50 minutes later I was in Macao Special Administrative Region of the People’s Republic of China (the official name). From the ferry terminal I stopped at an ATM to get some Macau patacas then caught the public bus to the historic centre.

Since Macau was a former Portuguese colony for centuries (until 1999) there is a number of colonial style buildings in area that have been maintained very well. It adds a European feel to that area of the city. Macau is also popular as a resort and gambling destination. Numerous casinos can be found that, with their sheer size and excess, gives Las Vegas hotels a run for its money. This also means that there are tourists galore! Especially as the day progressed. In fact there were too many people for my liking. Macau is the most densely populated area in the world (650,000+ residents in a 30.5 sq km / 11.8 sq mile area) and then add tourists – well it makes for a crowded place! This that left me not admiring Macau as much as I thought I would.  All the sights were jammed with people. I did find a few less crowed streets and a nice park for a short reprieve. In the end I left rather early (5:30pm ferry) as I was getting annoyed with the massive hustle and bustle. I did enjoy seeing Macau’s architecture, both colonial and modern (and the egg tarts) though the masses took its toll on my wanderings. I think Macau and I need a do-over. Include an overnight stay and wander in the mornings and evenings and then relax at a restaurant or cafe during the day. Yeah, Macau, let’s have a do-over one day.

All photos taken and owned by Eeva Valiharju / Wanders The World 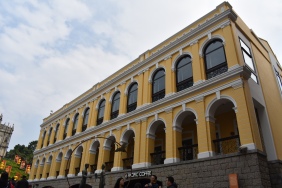 Along a side street

Interior of the Grand Lisboa Hotel and Casino