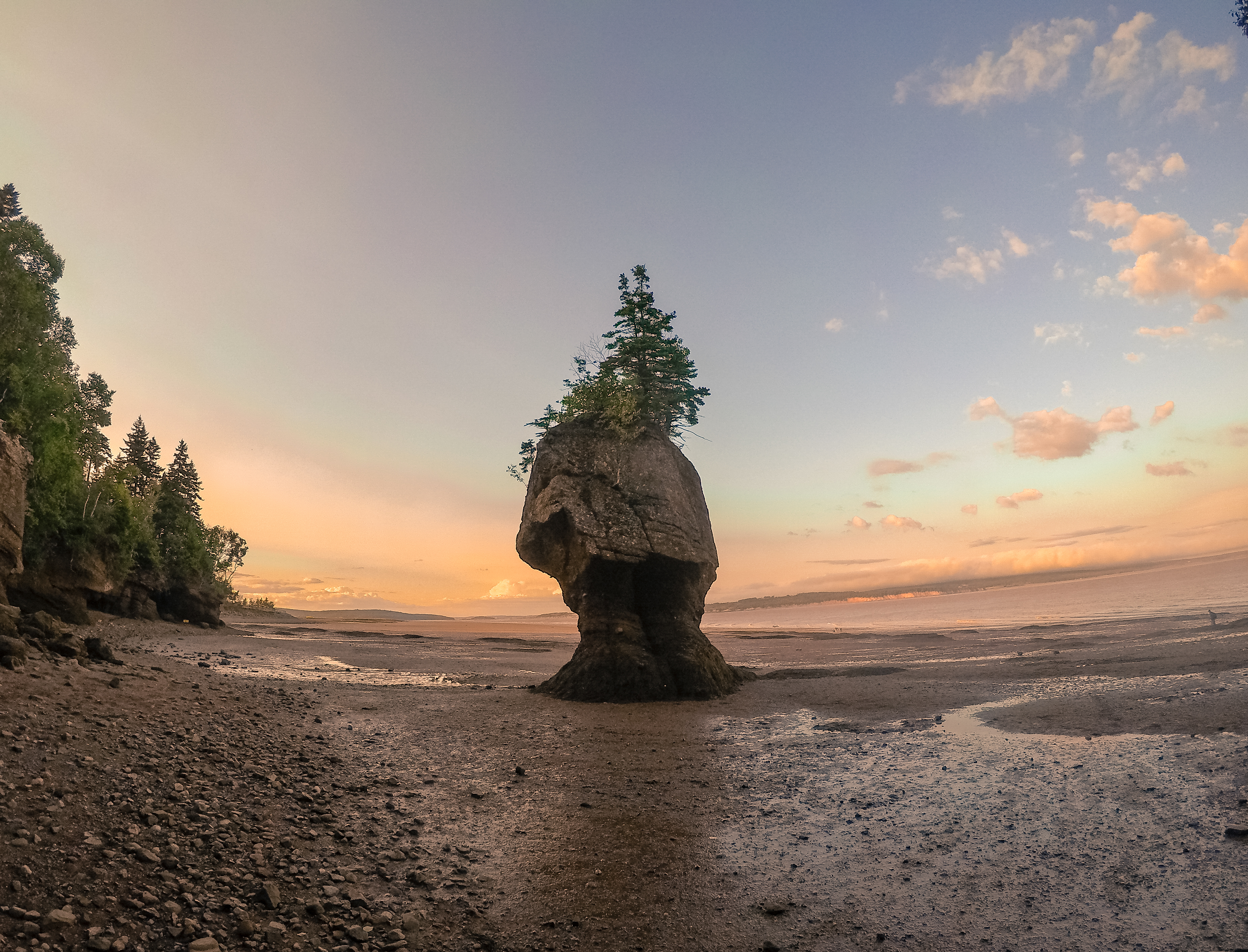 Seeing as Canada is the world’s second largest country by landmass it is going to have some varied and cool natural places to wander in. One of the most incredible (that I have yet to visit) is the Bay of Fundy /Baie de Fundy. Found straddling the provinces of New Brunswick and Nova Scotia on Canada’s Atlantic Coast, it boasts the title of the world’s highest tides. The range of the tides, which are also semidiurnal (fancy name meaning the there are two low and high tides per day) is vast – upwards of 15 m / 43 ft. That is 160 billion tonnes of water rolling in and out of the bay each day!

THINGS TO SEE AND DO

VIEWING THE TIDES: Although the Bay of Fundy is large and is between two provinces (and extends a wee bit into Maine, USA) you are able to visit and experience some of what it offers. Views along the coasts will showcase the tidal flows, though from what I have learned, the most dramatic changes occur at the head of the bay. Heading further towards the mouth is impressive though not nearly as striking. There are various areas where you can witness the changing flows with the Minas Basin holding the highest tides.

WALK THE OCEAN FLOOR & MORE: Hopewell Rocks Park is one of the most popular spots to do this. An hour’s drive from the city of Moncton, NB the park is a place where one can explore to their heart’s content. During low tide you can walk ocean floor and marvel at the cliffs and sandstone rock formations that tower around you. Perhaps you can even find a cave to explore. When the tides flow back in many will take to the waters in kayaks or take to land by hiking in the abundance of nearby trails. There are beaches for relaxing and picnicking, an interpretive centre and playground for families, and plenty of birds showing off their flight skills.

WHALE WATCHING: With many types of whales in the area, whale watching has grown in popularity. Tours are available in both New Brunswick and Nova Scotia, with a number of companies offering them. Some of species of whales that call the bay home are humpback, finback, and minke whales.

ADVENTURE ACTIVITIES: Stonehammer UNESCO Global Geopark in Saint John, NB (on the coast of Bay of Fundy) is where you can go kayaking and learn of geology; walk over the Reversing Rapids on a glass floor open air boardwalk or zip line above them; and explore on bike or foot through the various nature trails. On Nova Scotia’s Shubenacadie River, Tibal Bore Rafting might be the adrenal rush you seek. Bores occur when tides overflow into a river against the current causing a wave. On the Shubenacadie they can reach up to 1 metre / 3 feet in height. And that is where Tidal Bore Rafting comes in. Several companies offer it during the summer months in Maitland, NS (not far from the city of Truro, NS).

With a large area there is no lack of places to see the wonders of nature in this region of Canada. There are cities, towns, and stops along the way that can likely make time here seem like a treasure hunt of sorts.

At the time of posting the provinces of New Brunswick and Nova Scotia have travel restrictions in place due to COVID-19.