I just finished watching the Vancouver 2010 Winter Olympics Opening Ceremonies (via TV) and am filled with awe pride for my country, city and athletes.

Living in Vancouver and watching over the years how the city has prepared has been interesting. Whether you are for, against or ambivilent about the games, you can’t deny that a tale of history is emerging. This is the third Olympic games that have been held in Canada. I first watched the Montreal Summer games when I was but a child (and cried and cried watching the closing ceremonies because they were over, at least according to my dad). I remember watching a bit during the Calgary Winter games in 1988 but I was only 19 and had more important things to do (like shop). I was still proud though, that the games were in Canada. Now 22 years later (and only somewhat more mature) I am thrilled that my city and country is welcoming the best of the best in winter sports. I am even more thrilled that THIS WILL BE THE YEAR that Canada wins gold on home ground. The media campaigns have been stating this over & over and it’s true. I saw it in the faces of Team Canada as they entered BC Place. You can feel it all over the city. My friends believe. I  BELIEVE!

Like it or not, the Olympics are here. It is a wonderful celebration of sport and sportsmanship. Kudos and best of luck to all the athletes. I couldn’t do what they do. I don’t have the discipline, the drive or the talent. They are to be celebrated! 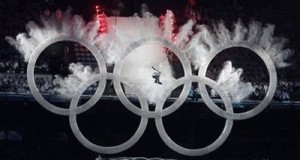 One a sad note, I’d like to extend my thoughts, prayers and condolences to the family, friends, teammates and country of Georgian luger Nodar Kumaritashvili, who was killed in a practice luge run earlier today. May you find peace and your spirit live on.