A note and an apology: This weekend was my birthday weekend and what a fun one it was. Additionally, my big sis is visiting. We had a fun yet busy day today and are sitting down to a nice dinner in about five minutes. As a result I am purposefully engaging in what some may consider a faux pas. I am reposting an old blog entry. In my defence, it was posted on my old blog that was with Blogger and I did not have much of a readership. My apologies and it is my hope that many of you it will be a ‘new’ post, so to speak.

Freetown Christiania is a micronation found within the city of Copenhagen, Denmark.  To quote Wikipedia: “Micronations, sometimes also referred to as model countries and new country projects, are entities that claim to be independent nations or states but which are not recognized by governments or international organizations.”

Okay, so it is not a real country but it is a real place.  The area it is located in has had various incarnations. More recently, prior to it becoming Christiania, it was deserted military barracks. In 1971 it was taken over by “The Hippie Movement” and “The Squatter Movement”. Although its almost 1,000 residents call it a free nation, most recognize it as a commune. 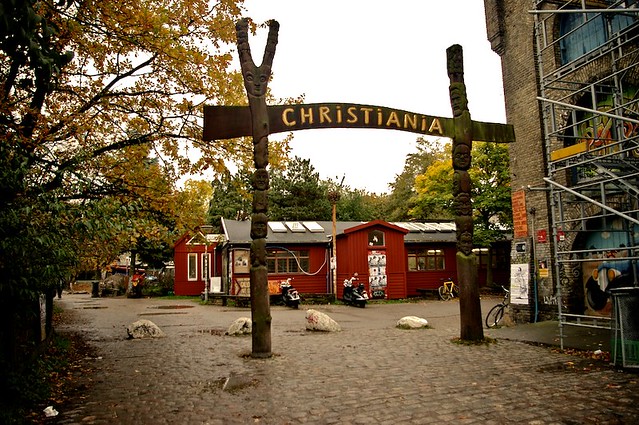 Christiania has had a colourful and eventful history that is for certain. From officials trying to have it closed, tourist flocking to get an eyeful to idealists trying to live simply to dubious characters around the infamous “Pusher Street” and old buildings in disrepair and then re-done, there appears to be no lack of adventure to be found in the unique community.