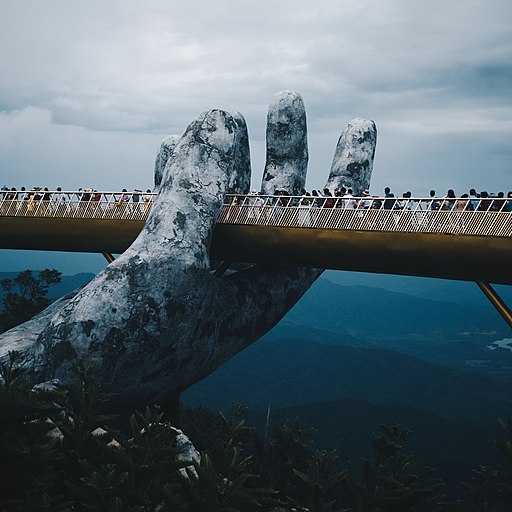 They appear as age-old weathered hands upholding a golden rope above the lush forests of the Bà Nà Hills. Not far from Da Nang, Vietnam, The Golden Bridge (Cau Vang) overlooks the Annamese Mountains (Dãy Trường Sơn) providing both a vast view of nature while taking in modern engineering and sculpture. Although you may think the hands have existed here for centuries they were, in fact, purposely designed to appear aged, as though they were always presenting the gold hued bridge as an offering.

Bà Nà Hills was originally created as a resort town that opened in the early twentieth century CE by French colonists. Although the old resort no longer remains other attractions have come to the area over the years including a single-track cable car that is the longest in the world. The newest addition is the 150 m/ 492 ft bridge and it has wowed those who have visited. It may seem you can touch the clouds as you meander along at 1,400 m / 4,600 ft above sea level, marvelling at both nature and the engineering of man.